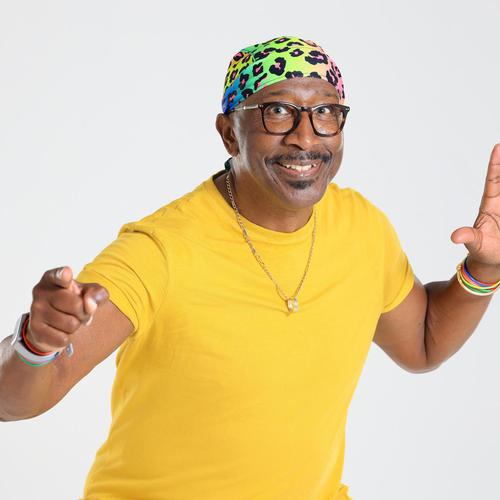 Sessions covered by this speaker

Derrick Errol Evans (Mr Motivator) was born in Jamaica, but has lived most of his life in the UK.

After starting in the fitness business as an instructor in North west London, Evans went on to provide One2one training to many Celebrities.  His big break came on the 23rd August 1993, he was Credited with turning around the fortunes of the Breakfast Television Show GMTV.

Evans created a memorable persona wearing his now trademark bright coloured unitards, with complimentary socks and bum bags. He then went on to release a number of exercise videos and this range of videos, called BLT (Bums, Legs Tums) became the biggest selling titles in the UK and to date over 2m videos have been sold.

After approximately 10 years at GMTV Evans resigned and proceeded to develop the Motivational speaking side of his abilities, Providing talks and Team Building activities for many blue chip companies.

Each year he makes Personal appearances on the main stage at many Family Music Festivals, around the UK and abroad with also many Motivational speaking engagements

He has been living between the UK and Jamaica since the year 2000, running his eco-friendly adventure park called H’Evans Scent. Evans spends time travelling to the UK each month to carry out his many public duties.

2009 came back to GMTV to spearhead a campaign on Fitness, The Get Motivated club, where he met prime Minister Gordon Brown and also worked on the Change 4 life campaign with the NHS.

Evans provides mass workouts for many varying charities, schools and his unique way of exercising, has meant that he is in great demand which continues to lead to numerous Television, Film and radio appearances.

2017: He launched his autobiography called The Warm Up, a story of his life so far

·        Worked with BBC radio on a wellbeing roadshow at select locations in the UK.

·        Providing Motivation wellness talks and Movement to staff in companies around

We use cookies This website (and some of its third-party tools) use cookies. These are important as they allow us to deliver an exceptional experience whilst browsing the site.